A Tribute to Richard Elias

It is with deep sadness that we acknowledge the sudden passing of Richard Elias on March 28. We have spent the last few weeks reeling in the sadness of his death and wanted to take the time to find the words to express everything that feels important to honor about him, and his work to ensure the safety of everyone in our community.

There have been many heartfelt messages from community members and organizations who loved Richard and benefited from his work in our community. He has been a steadfast supporter of services that support survivors of domestic abuse and sexual violence for many years. In his role as a County Supervisor, he always ensured that he, with the support of his colleagues on the board, prioritized funding and availability of these services. He often named that domestic abuse and sexual violence were a critical public health issue that directly impacts the health and well-being of everyone in this community.

Richard Elias was a true leader of our community. Not because he was a Supervisor of District 5, not because he worked for nonprofits or for the government. Not even because he spent the majority of his life in public service.

What made Richard a true leader was that he cared about human beings on the deepest possible level. He wasn’t afraid to look at, get down into and stand up against the darkest and most difficult challenges our community faces every day – including the alarming rate of women dying in our community, whether from domestic abuse or hate crimes, or missing and murdered indigenous women.

He also cared deeply for the LGBTQ community in Tucson and knew their safety is equally critical to our work. He was the only elected official to attend and fully participate in a community workshop about the role of men in developing solutions to preventing domestic abuse. He understood that as a male-identified person and a person with power and authority in our community, he set a tone and expectation for others. Richard did it with humility and grace.

Richard gave many heartfelt speeches about domestic abuse where he honored his mother, Viola, and her story of pain and abuse. He often appeared emotional as he said her name and acknowledged her experience. He said it was his duty to tell her story, to make visible the experiences that so many individuals and families have in our community. At our last press conference recognizing Domestic Violence Awareness Month last October, Richard’s comments diverged from his colleagues when he started by asking for a moment of silence to recognize all the women who have died due to domestic abuse – those who we knew, and those who we didn’t. 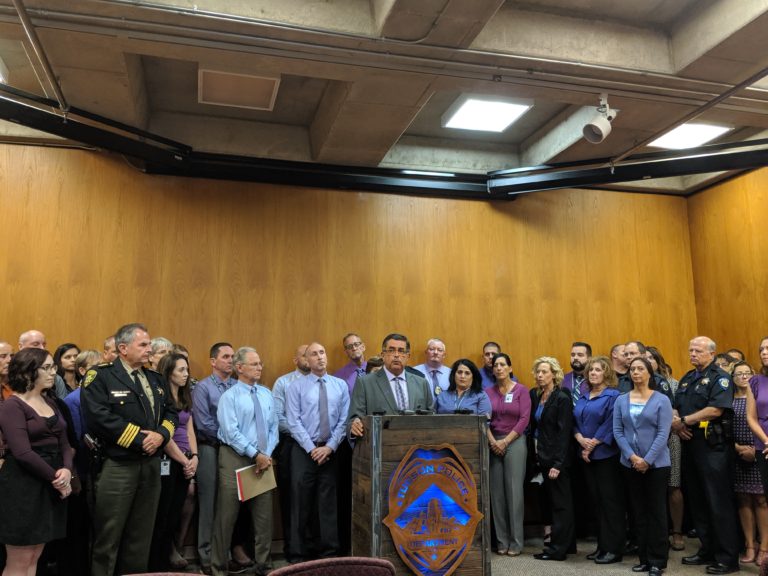 Richard never required convincing about the importance of building safety in our community and never questioned his role in providing leadership about the impact of domestic abuse.

He was a true friend to Emerge, the sincerest kind of friend who supported every effort launched by the organization. We will miss him deeply – more than words can express. We are hopeful that Richard’s heart for our community and legacy of caring for those who are most vulnerable will be carried on in the next generation of people Richard influenced. We are all called to honor his life in our work to remind the community of what’s important – advocating on behalf of those who may otherwise go forgotten.

On behalf of the staff and volunteers of Emerge, we extend our heartfelt condolences to Richard’s wife Emily, his daughter Luz, and his other beloved family members.

Rest easy Richard. We will carry on.